What Are the Best Treatments for Those Hemorrhoids? 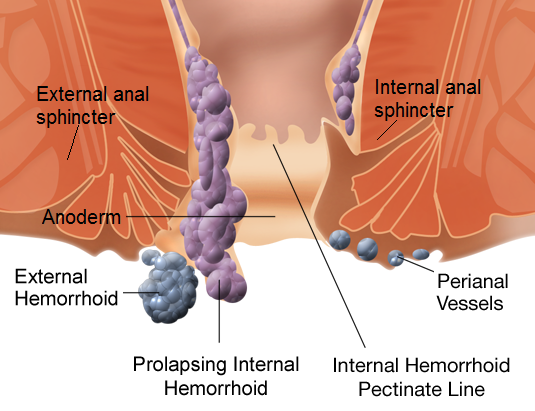 When the veins in the anus and lower rectum get inflamed and swollen, the condition is called piles or hemorrhoids. It occurs when there is a lot of strain exerted while defecating or even during pregnancy when there is excess pressure on the veins. Hemorrhoids can be internal or external. When they are present inside the rectum, they are referred to as internal and when they appear around the anus, under the skin, they are external hemorrhoids.

Hemorrhoids do not get completely cured on their own and usually a procedure is required. Some treatments can make it better and conventional as well as other medical practitioners believe that dietary modification is the great treatments for hemorrhoids.

The diet should include high-fiber foods and processed foods should be reduced as much as possible. Around 6-8 glasses (8 ounce) of fluids should be taken a day. In case there is any other underlying condition, it is better to check the fluid requirement with the doctor. Even when a surgery or medication is recommended, dietary modifications are required.

The fiber requirement per day is 25 grams for women and 38 grams for men; however, it usually can't be met from diet alone. Fiber supplements which are available OTC help in reducing the symptoms associated with hemorrhoids, by keeping the stools soft and regular. A person taking fiber supplement should ensure that they drink plenty of fluids, otherwise it can cause constipation.

One of the best hemorrhoid treatments is a sitz bath, which helps in reducing the pain and itching. It has been recommended since many years and is routinely suggested. The person should sit in warm water of around 3 inches level, for 15 minutes. This should be done several times in a day, especially immediately after a bowel movement. This helps reduce swelling and relax the spasms of the sphincter muscle. In case of pregnancy, this should first be discussed with the doctor.

Over the counter medications to relieve pain can be taken. Tylenol, aspirin and NSAIDs like ibuprofen and naproxen also help in reducing the pain and swelling. However, medications should be taken with caution and all instructions should be read and followed properly.

Another best treatment for hemorrhoids is applying OTC creams for hemorrhoids or the ones containing hydrocortisone. Pads which contain witch hazel or numbing agent can be used.

8. Use Cold and Warm Compress

When the hemorrhoids are irritated, the best hemroid treatment is to avoid sitting or standing for a long time. If sitting is essential, a pillow should be used to sit on. Heavy objects should not be lifted.

If you've find the best treatment for hemorrhoids, the symptoms often go away in a week’s time. If they persist for more than a week or if the pain gets severe, along with bleeding, the doctor should be consulted. The doctor will suggest getting one of the procedures mentioned below, some of which can be performed in the doctor’s office as well:

Hemorrhoids which are prolapsed are secured with a small rubber band using a special tool. This cuts off the blood supply to the hemorrhoid, causing it to shrivel and fall off within a week. It is called rubber band ligation.

The end of a hemorrhoid is sealed by a painless burn using a laser beam, an electric probe or an infrared light. The hemorrhoid closes and shrinks and this is the best treatment for hemorrhoids which are prolapsed.

The treatments for removing hemorrhoids are effective, but they need to be supported by changes in lifestyle as well as diet, otherwise the hemorrhoids recur.