A rare skin condition, bullous pemphigoid, causes blisters which are large and filled with fluid on areas of the skin which flex often like the upper thighs, lower abdomen or armpits. It is seen most in people who are over the age of sixty.

When your immune system attacks a thin layer of issue under the outer layer of skin, pemphigoid can occur. Why the immune system has this abnormal response is unknown but it can be triggered sometimes from particular medications.

Usually, treatment involves corticosteroids, like prednisone, plus other drugs which suppress the immune system. Bullous pemphigoid can be life-threatening, especially for elderly who are in poor health already. 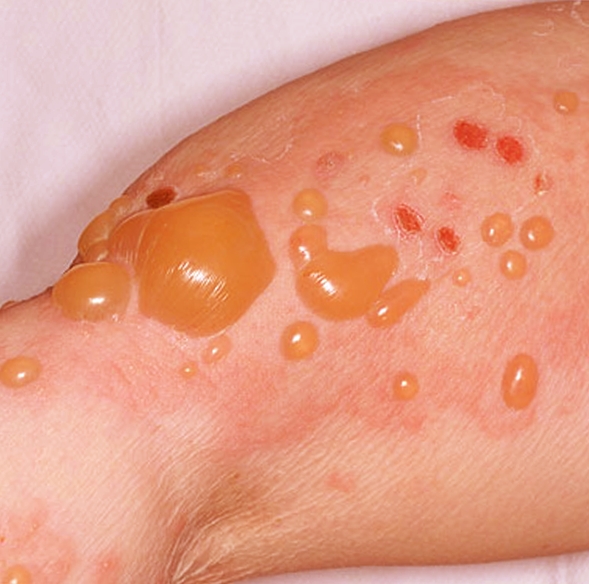 The main symptoms of bullous pemphigoid are blisters appearing on the skin, which occur normally in areas where the skin flexes or bends. There can be other symptoms like patches of itchy skin or a rash.

If unexplained blistering develops on your skin, such as a condition not caused by a known allergy or coming into contact with poison ivy, speak with your doctor right away.

If the blisters rupture and become infected, it can lead to sepsis, which is a potentially life-threatening infection that will affect your whole body. This is a serious complication that is likely to occur more in older adults who are in poor health already. Rare forms of pemphigoid that involve the mucous membranes of the eye or mouth can lead to scarring.

Usually, bullous pemphigoid appears randomly, giving no clear reasons that contribute to the reason the disease began. A small amount of cases could be triggered by particular medical treatments, like:

The goal of treatment for this condition is to assist the skin in healing as soon as possible and relieve the itchiness. Your doctor will probably prescribe a drug combination which will inhibit immune system activities which cause inflammation. The drugs could include:

Your skin can become fragile due to the blisters which form with bullous pemphigoid. If one of these blisters break, cover it up with a dry and sterile dressing to keep it from getting infected as it heals.

Avoid long periods in the sun on any affected areas of the skin.

Avoid crunchy and hard foods if you have blisters in your mouth. Foods such as chips or raw vegetables and fruits could aggravate your symptoms.

The Outlook (Prognosis) of Bullous Pemphigoid

Generally, the outlook is good. This condition goes away many times after one to five years, and in the meantime, treatment will usually keep the blisters down to a level that is tolerable or away altogether. Treatment can often be stopped after about one to five years since it will no longer be needed.

Sometimes, BP can cause serious illness, and even death. This occurs because:

Apart from Bullous Pemphigoid, there are other skin diseases that call for attention because sometimes the symptoms are confusing.

Red, thick patches of skin covered in with silvery or white scales are known as psoriasis. The patches appear on your elbows, scalp, hands, lower back and knees. They can heal and come back throughout your lifetime. Treatments include ointments and creams, oral medications, light therapy, IV or injection.

A blanket term for many non-contagious conditions which cause red, inflamed, itchy and dry skin, eczema does not have a known cause. However, irritants, stress, allergens and climate can trigger flares. For adults, it occurs many times on hands, elbows and skin folds. There are many medications for eczema treatment. Some are spread onto the skin, while others are a shot or oral.

Flushing easily, followed by redness on your chin, nose, forehead and cheeks, could be signs of rosacea. This can get redder over time with blood vessels that are visible. You could have skin which is thickened, pus-filled pimples or bumps. It can also affect your eyes. Oral medications or medications spread on the skin are available. Your doctor can treat broken blood vessels and thickened or red skin with lasers. 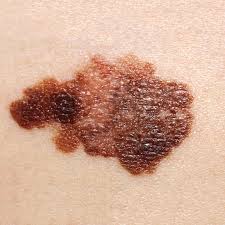 This is a severe and potentially life-threatening cancer. You need to know what to watch for with any moles that you may have: