Which Muscles Will Pushups Work?

Push-ups are basic strength-building total body exercises that strengthen the upper body and improve the core strength. Several muscle groups in the chest, arms, shoulder, triceps, back, and neck work simultaneously during a push-up. Push-ups are performed in a prone position, which can help develop a good posture.

Military personnel and athletes do push-ups as part of exercise regimen that helps strengthen the upper back and shoulder while providing stability to the torso, and promote muscle endurance and overall fitness.

What Muscles Do Push-ups Work? 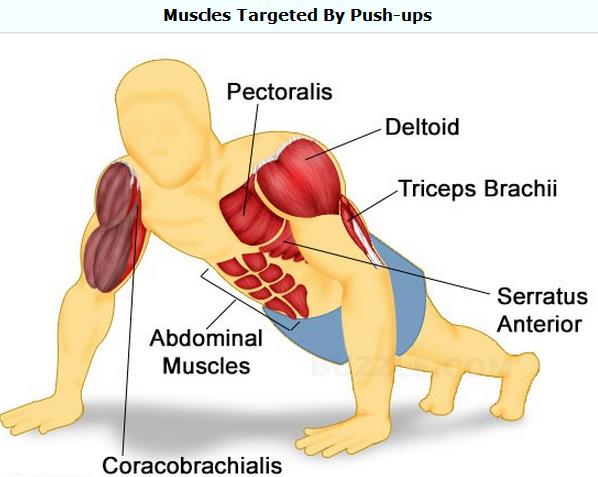 Various muscles in the upper body work together during a push-up. The main muscles targeted are:

Deltoids. These are the shoulder muscles helping the pectoralis major to push the body during a push-up. Although they are a weaker muscle group, they are crucial to all movements of the shoulder. The rounded shoulder look is due to a well-defined deltoid.

Triceps Brachii. Triceps are situated at the back of the upper arm and help in extending the arm outward. It makes up about two-thirds of the upper arm mass and is most exerted muscle during push-ups.

Serratus Anterior. The serratus anterior lies under the armpit at the back of the chest. The muscles give the scapula a winged look. These muscles are activated during a push-up and doing regular push-ups strengthens the serratus anterior muscle helping in smooth movements during exercises.

How to do Push-ups

What muscles do pushups work? They only work if you practice the right way. The following steps explain how to do a push-up:

The wider your arms, the better it is for you to execute a successful push-up. If you are a beginner, do a slow and proper push-up and do not rush to simply finish off the push-up. You can begin by balancing on your knees instead of your toes if you find it easier. Then you can begin to balance on your toes when you feel confident and relaxed. Try not to lower your hips during a push-up. If your lower back begins to hurt during a push-up, stop and take a break.

What muscles do pushups work？There are many different kinds of push-ups and the most common are:

Wide Grip Push-ups. This classis push-up is more difficult than the standard push-up as it provides less mechanical advantage to push your body upward. The wide grip push-up targets the chest, triceps, and muscles in the front of the shoulder. The shoulders and chest are worked up with the assistance of the triceps.

Incline Push-ups. The incline push-up is the most commonly used push-up targeting different parts of the chest. The triceps, deltoids, and core muscles are activated during incline push-ups, with lesser stress on the elbows reducing the amount of body weight being lifted. Incline push-ups activate the chest muscles and prevent sagging of the spinal column. With a slow motion, the core is engaged and the incline push-up can be used as a pre- or post-exercise stretch.

Decline Push-up. A decline push-up is an advanced upper body exercise targeting the chest, shoulders, arms, and back. By placing the feet higher than the hands, the level of difficulty can be significantly increased because maintaining proper rigid body position requires significant strength and stability in the core, legs, and back.

One-Arm Push-up. A one-arm push-up strengthens the chest and triceps muscles and builds a strong and muscular core. The abdominal muscles and obliques have to work extra hard to keep the body stabilized on one arm and you must have sufficient strength to maintain the position. Building muscle and strength is important for total body control during a one-arm push-up.