Red Spots on the Throat: 8 Causes and Treatments

Little red bumps on the throat should be observed carefully, especially if accompanied by sore throat and fever. Another warning sign is the appearance of white spots in the throat. Usually red spots in the throat are related to some viral infection that does not last long. However, knowing some of the possible causes can help, especially if they linger for more than a few days. Those red bumps can indicate the body's response to a viral infection. It is a common reaction that does not necessarily need immediate medical consultation unless the throat continues to become sore or swollen. 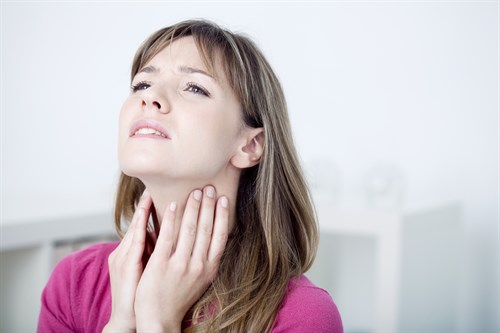 Causes and Treatments of Red Bumps on Throat

Here are the most common causes of red spots in the throat:

This is a bacterial infection in the throat that can make it feel sore, painful and scratchy. It may be difficult to swallow and the neck glands may become swollen. Fever, rashes, headaches, and fatigue are common. This is a highly contagious condition that is caused by Streptococcus pyogenes, or group A streptococcus. It is important to identify and treat strep throat infection because it can sometimes cause serious complications like rheumatic fever and kidney inflammation.

Treatment: The infection is diagnosed based on medical history, physical examination and laboratory test consisting of throat culture. A rapid antigen test may also be done to provide a quick diagnosis and treatment. Treatment consists of oral antibiotics (penicillin or amoxicillin) and over-the-counter symptom relievers like acetaminophen.

Swelling and inflammation of the tonsils can cause red bumps on throat. The tonsils are large lymph nodes at the top of the throat, which may become infected with bacteria or viruses. Other parts of the throat may also be affected. This condition is common in children, and may cause difficulty in swallowing, ear pains, fever, sore throat, headaches, and tenderness of the throat and jaw.

Treatment: Examination of the throat reveals red tonsils, which may have white spots. A rapid strep test or throat culture may be done to rule out a strep infection. Swollen tonsils may not be treated if they are not painful or if there are no other symptoms. However, if a bacterial infection is suspected, the doctor may prescribe antibiotics and other symptom relievers, including acetaminophen.

This is a common illness more popularly known as "mono" or kissing disease. It is common among teens and young adults, and spreads through saliva and nasal secretions. Symptoms include sore throat, fever, weakness and fatigue.

Treatment: The infection is caused by a virus called EBV or Epstein-Barr virus. Blood tests (monospot test) may be done to diagnose the infection and rule out other possible causes. The infection is usually mild and self-limiting. Bed rest, gargling with salt water and taking or ibuprofen (Advil) or acetaminophen (Tylenol) may relieve symptoms.

This viral infection is common among children who have not received the vaccine for the varicella-zoster virus. Young children are usually affected but even older children and adults may get the disease. Classic symptoms include a persistent, itchy rash, which turns into blisters and later into scabs. These are usually seen on the chest, face, and back and they later spread to other parts of the body. Sore throat, fever, headache, and loss of appetite are common. Diagnosis is based on clinical evaluation but in special cases, an antibody test may be done.

Treatment: The condition may be mild and last for five to ten days. Itchiness may be relieved by using calamine lotion or oatmeal baths. However, it can also cause serious problems in older adults, babies, and pregnant women. In these cases, antiviral medications may be prescribed.

Once a scary, serious disease, this viral infection is now easily treatable. It is caused by the same bacteria which causes strep throat (group A Streptococcus bacteria), and produces a toxin inducing the appearance of red rashes. Other symptoms include high fever, abdominal pain, headache, red, swollen tongue and sore throat. Rashes have a sand paper-like texture and appear initially on the chest and neck, later spreading over the other parts of the body. After a week, the rashes fade and peel off.

Treatment: Diagnosis is based on clinical evaluation and laboratory tests consisting of throat cultures and rapid antigen test. Antibiotics are usually prescribed to prevent rheumatic fever, one of its serious complications.

This is a rare complication of bacterial infection, which could be life-threatening. Although it has often been associated with the use of tampons and contraceptive sponges, even men and children can get the infection from wounds and surgery. TSS results from toxins produced by bacteria, particularly Staphylococcus aureus and group A streptococcus. Signs and symptoms of TSS often develop suddenly, including redness in the throat, high fever, vomiting, diarrhea, rashes, confusion, muscle pain, headaches and seizures.

Treatment: There is no specific test for TSS and blood and urine tests may be done to detect the presence of staphylococcus or streptococcus infection. Vaginal, cervical and throat swabs may also be necessary for diagnosis. Since the infection is potentially serious, antibiotic treatment and hospitalization may be necessary.

A common viral infection of the upper respiratory tract that is usually harmless but troublesome is called the common cold. Symptoms include sore throat, red bumps on throat, runny nose, sneezing, cough, watery eyes, and nasal congestion. It can affect persons of any age and it is usually transmitted through the air.

Low fever may be experienced, but high fever is not characteristic of the common cold. Colds may be caused by one of more than a hundred viruses and symptoms vary widely.

Treatment: Symptoms usually resolve in a week or two, even without treatment. There is no cure for it but symptoms may be relieved with over-the-counter pain relievers, nasal decongestants, and cough syrup.

Hay fever or allergic rhinitis is a condition that causes symptoms resembling colds, such as congestion, sneezing, runny nose, sinus pressure, and itchy eyes. However, hay fever is not caused by viruses or bacteria, but by an allergic response to allergens, like pollen, pet dander, or dust mites. Allergens are substances in the environment, which trigger an increased immune response in the body, leading to various symptoms. Allergies can affect anyone, and may be related to seasonal changes.

Diagnosis may involve a skin prick test, where small amounts of potential allergens are introduced into the skin to test for an allergic reaction. An allergy blood test called radioallergosorbent test (RAST) may also be done to measure the immune system response to specific allergens.

Treatment: Just like colds, hay fever can affect one's activities and may need symptomatic treatment, including nasal decongestants, and medications to prevent flare-ups and suppress excessive immune responses, such as antihistamines and corticosteroids.

As you can see, red bumps on throat are part of a set of symptoms that can come from various conditions. Some of these conditions are mild and self-limiting, such as the common cold, but some may be serious and life threatening, although less common. If you have symptoms that do not get better within a few days or are getting worse, it is best to see a doctor to determine the exact cause and get proper treatment.