What Is Tarsal Tunnel Syndrome? 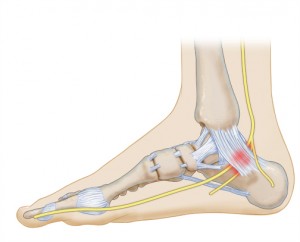 What Is Tarsal Tunnel Syndrome?

Within the foot, there is a small canal running between the medial malleolus (the bump on the inside of the foot, which is part of the ankle bone) and the flexor retinaculum (the strip of ligaments reaching across the foot). This is known as the tarsal tunnel, and it contains the blood vessels, nerves and tendons that allow foot flexibility and movement. One of the nerves running through the tarsal tunnel is the tibial nerve; this nerve provides sensation to the bottom of the foot. Compression of the tibial nerve results in tarsal tunnel syndrome.

Many factors can lead to squeezing of the posterior tibial nerve, including:

Tarsal tunnel syndrome is characterized by numbness, pain (often shooting pain), and a burning and tingling sensation that may feel like receiving an electric shock. Most patients experience these symptoms on the inside of the ankle or the bottom of the foot. The feeling may be confined to one spot, or spread to the toes, heel, arch of the foot or calf.

The disease is often exacerbated when the foot is overused, for example during exercise, prolonged standing, walking, or embarking on a new exercise regime. However, sometimes the symptoms can appear suddenly, with no apparent cause.

Once symptoms become noticeable, it is imperative to see a doctor as soon as possible. If the condition is left untreated, the symptoms may progress and you may suffer irreversible nerve damage. In addition, tarsal tunnel syndrome is often confused with other conditions, so it is important to receive the correct diagnosis and treatment.

The diagnosis of tarsal tunnel syndrome should be performed by a specialist neurologist. After the doctor has taken a thorough medical history and conducted a physical examination, electrical testing (either electromyography or a nerve conduction study) and imaging, through an MRI, an X-ray or a CT scan, can confirm the diagnosis. Disease severity also needs to be assessed to determine the type of treatment; in severe cases of tarsal tunnel syndrome, surgery may be required.

First, you’ll need to examine your calf muscle flexibility. The suppleness of the gastrocnemius muscle can be assessed by lying down on your back on a couch with your feet hanging off the end. Your therapist should be able to gently push each of your feet to a 90 degree angle, and you will feel a slight resistance, although the movement shouldn’t be forced.

To stretch the soleus muscle, which is lower down the leg than the gastrocnemius, start by standing facing a wall. Place the leg you want to stretch behind the other leg and bend both knees. Make sure that your heels are pressed into the ground, lean forward into the wall until you notice a stretch. If you can’t feel this stretch, try raising the front of the foot by placing an object under the toes, or place your foot up against the wall, pushing the knee forwards.

If symptoms have not improved following conventional therapies, surgical decompression, via sectioning of the flexor retinaculum, needs to be considered. To prevent nerve fibrosis developing, the decompression should be carried out as soon as possible. In terms of improving symptoms, tarsal tunnel relief has produced impressive results.

After surgery, 85-90% patients find that the symptoms of tarsal tunnel syndrome are relieved or improved.