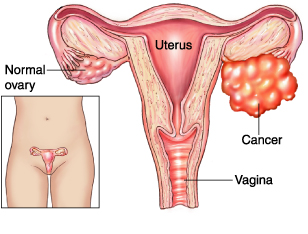 Ovarian cancer is a term that covers a few different cancers that occur from the epithelium cells of the ovary. These cancers occur in the fallopian tubes, epithelial ovarian which are the outer ovary lining, and the lining inside the abdomen called primary peritonea. Less common forms of ovarian cancer can occur within the ovary itself including sex cord-stromal tumors and germ cell tumors. There is also a condition called borderline ovarian tumors which have the appearance of cancer on a microscopic level but do not spread much.

What Are the Ovarian Cancer Symptoms?

There are a number of symptoms and they also depend on whether the cancer has spread outside the ovary or not. Early symptoms include:

These symptoms of early stage ovarian cancer typically come on suddenly, and they will feel different from any common menstrual or digestive issues, and they happen daily without going away.

Later stage ovarian cancer symptoms, where it has spread outside the ovary, include:

You should see your doctor if you experience any of the above symptoms every day and they last for two or three weeks. These symptoms can be common for many women due to menstrual or digestive issues, but it is better to be safe.

Here is a link to an informative video about the symptoms of ovarian cancer to be aware of:

How Is Ovarian Cancer Diagnosed?

There are a number of tests your doctor can perform if he/she suspects ovarian cancer or if you experience ovarian cancer symptoms. These tests include:

The chemical CA125 is sometimes produced by ovarian cancer cells and can be detected in the blood. While this test doesn’t necessarily mean cancer, as other conditions can produce CA125, your doctor can make an assessment when the results are combined with the symptoms above based on frequency and duration. This test may also be given if you are over the age of 50 or if you experience symptoms more than twelve times a year.

An ultrasound uses high frequency sound waves to create a picture of your ovaries, allowing your doctor to see what they look like in terms of size and texture, as well as seeing if any cysts are present. You may have a transvaginal ultrasound where the probe is inserted into the vagina or an external ultrasound is used.

If your doctor has diagnosed you with ovarian cancer, further testing will usually be done to determine the size of the tumor and if the cancer has spread. This determines the stage of the cancer. These tests include:

What Are the Risks of Ovarian Cancer?

There are a number of risk factors to increase your chance of experiencing ovarian cancer symptoms, which include:

Can Ovarian Cancer Be Prevented?

There are a few ways to lower your risk of ovarian cancer, including eating a healthy diet that is low in fat and including plenty of fruits and vegetables, doing exercise and physical activity, and taking birth control pills, which can lower your risk by as much as fifty percent.