All about Pelvic Inflammatory Disease 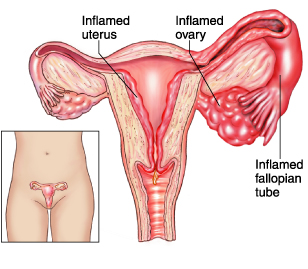 Pelvic inflammatory disease is an infection of the reproductive organs in women. It can be caused by other infections, but it is most commonly the most serious complication of sexually transmitted disease such as gonorrhea or chlamydia. It is a major treatable cause of female infertility. It can also cause irreversible damage to the reproductive organs including the ovaries, fallopian tubes, and uterus.

Every year in the United States more than 1 million women will experience this condition and more than 100,000 of those women will become infertile. A large proportion of the 100,000 ectopic or tubal pregnancies that occur each year can be linked to the disease. The rate is highest among teenagers.

Under normal circumstances the cervix prevents bacteria entering the vagina from spreading to the internal reproductive organs. When the cervix itself is exposed to a sexually transmitted disease such as chlamydia or gonorrhea the cervix then becomes infected and unable to prevent the spread of bacteria to the internal organs. Pelvic inflammatory disease occurs when the bacteria travels from the cervix to the upper genital tract. Gonorrhea and chlamydia that is left untreated causes about 90% of all pelvic inflammatory disease infections. Other causes include infection during childbirth, abortion, and other pelvic procedures.

You are at an increased risk if you:

What Are Common Symptoms of Pelvic Inflammatory Disease?

There are a number of symptoms you need to be aware of. If you have any of these symptoms, you should see your doctor right away:

There are a few complications that can be caused by pelvic inflammatory disease as a result of damage to reproductive organs, scarring, and abscesses (pus-filled areas). These complications include:

How Is Pelvic Inflammatory Disease Diagnosed and Treated?

In most cases the signs and symptoms you report to your doctor are enough to make a diagnosis. The doctor will also perform an exam and if a lump is detected or a blood test can be ordered. In some cases a laparoscopy (examination with a tube-like instrument) is done to look for any inflammation or other changes to the reproductive organs. Your doctor may also take samples to try and identify the bacteria causing the infection.

Pelvic inflammatory disease is typically treated with antibiotics, even if your doctor isn’t positive that PID is the cause of your infection because any delay in treatment can cause irreversible damage to the reproductive organs and cause infertility. Your partner will also be given antibiotics so that he cannot re-infect you. The prescription will usually involve a combination of antibiotics to ensure that all bacterial infections are treated that could cause pelvic inflammatory disease. You must take the entire course of medication. You may also be directed to take over-the-counter pain relievers. It is also recommended that you avoid all forms of sexual activity until you and your partner have completed treatment to prevent re-infection.

How to Prevent Pelvic Inflammatory Disease

There are a number of ways to prevent it. These include: