Bruises on Your Legs: Causes and Treatments 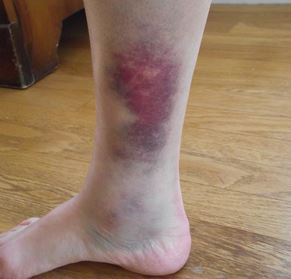 Bruise is the term used to describe the pooling of blood in a small area. Ecchymosis is an alternative name for a bruise. If the bleeding into a bruise continues to pool in tissues, it is called a hematoma. Bruises can form inside the body, below the skin, inside a muscle, or near bones. Pain often accompanies bruising, and in some cases swelling may be apparent. If the bruising occurs below the skin or near bones, typically, the pain is worse. When a bruise occurs below the skin, it may appear as a discolored area and then it may spread or change color prior to resolving. Initially, the bruise may be a red or pink color, it then changes to a blue color, and finally it becomes a yellow-greenish color.

In a superficial bruise, the blood supplying the overlying skin is compromised. Within the muscle, a superficial bruise can lead to compartment syndrome and dead muscle cells if the blood supply to the muscle is decreased. The time required to heal a bruise varies from a few days to months depending on the severity of the bruise. In this article, bruises on the legs will be discussed in details.

Causes of Bruises on Legs

Leg bruises can occur as a result of trauma. Other causes of leg bruises include medications and medical conditions that impair blood clotting, as well as medical conditions that cause the skin to become thin or weaken blood vessels. A leg bruise can be the result of life-threatening or serious medical conditions and they are often associated with major complications that require immediate medical attention. These major complications include excessive swelling, a fever higher than 101°F, red streaking surrounding the bruise, or drainage from the bruise. In addition, symptoms of shock, such as clammy or pale skin, increased heart rate, pain in the chest, reduction in urine, blue colored lips and nail beds, dizziness and confusion, copious amounts of sweating, and loss of consciousness, may be warning signs that necessitate medical attention.

Treatments for Bruises on Legs

Pain and swelling of a bruised body part makes it difficult to move. While there are many home remedies for bruises, there are some important things to remember. First, do not use any of these remedies to treat areas surrounding the mouth, eyes, and nose. Second, do not puncture the bruise with any sharp instruments to drain it. Finally, avoid any strenuous physical activities that may further injure the bruised area.

Below are some at home remedies for the treatment of bruises.

Ice: An easy and effective treatment for new bruises is the application of an ice pack. Apply the ice pack to the bruise for 15 minutes at 1 hour intervals. This should alleviate the swelling and help to relieve the pain.

Hot Compresses: Applying a hot compress to the bruised area can alleviate the bruising and the associated pain. Hot compresses are a great treatment for older injuries and muscle-related injuries.

Medications: The over-the-counter painkiller acetaminophen is a good treatment for bruises on legs whether on bones, muscles, and skin.

Homeopathic Medicines: The homeopathic medicine Arnica is available over-the-counter and it is helpful for the treatment of dark or swollen bruises. To reduce the bruising and the associated swelling and stiffness, Arnica gel should be applied every 3 hours to the bruised area. Some people may experience an allergic reaction to the Arnica gel, which is characterized by itching and redness. If you experience these symptoms, discontinue using Arnica gel immediately.

Take It Easy: Rest is the easiest treatment for bruises on legs. By resting the body part and keeping it elevated, you can decrease blood flow and speed up the healing process, as well as improve the discoloration of the bruise.