Positions and Functions of the Four Brain Lobes

The human brain is the most complex organ in the body. Composed of 50 to 100 billion neurons, the human brain remains one of the world's greatest unsolved mysteries. Here we will take a closer look at the four lobes of the brain to discover more about the location and function of each lobe.

Brain Lobes and their Functions 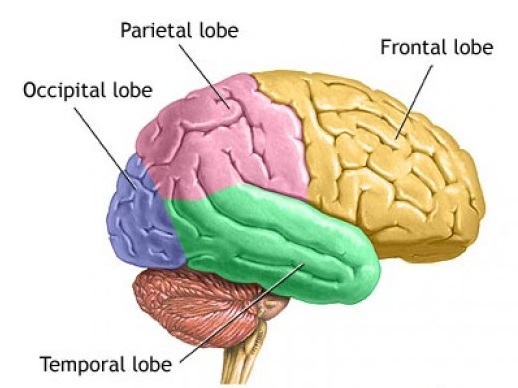 The brain is divided into four sections, known as lobes (as shown in the image). The frontal lobe, occipital lobe, parietal lobe, and temporal lobe have different locations and functions that support the responses and actions of the human body. Let's start by identifying where each lobe is positioned in the brain.

Position of the Lobes

The parietal lobe processes sensory information for cognitive purposes and helps coordinate spatial relations so we can make sense of the world around us. The parietal lobe resides in the middle section of the brain behind the central sulcus, above the occipital lobe.

The temporal lobe is located on the bottom of the brain below the lateral fissure. This lobe is also the location of the primary auditory cortex, which is important for interpreting the sounds and the language we hear.

Functions of the Lobes

It is more common to injure the frontal lobe than the other lobes of the brain because the lobe is located at the front of the skull. The effects of damage to the frontal lobe often result in personality changes, difficulty controlling sexual urges, and other impulsive and risk-taking behaviors.

The parietal lobe has several functions including sensation, perception, and spatial reasoning. This lobe is responsible for processing sensory information from various parts of the body. Here are some of the functions of the parietal lobe:

The type of impairment that results from damage to the temporal lobe depends on where the damage occurred in the lobe. Temporal lobe damage can lead to difficulty processing auditory sensations and visual perceptions, problems concentrating on visual and/or auditory stimuli, long-term memory problems, changes in personality, and changes in sexual behavior.

Since the skull protects the occipital lobe, injury is less likely to occur. However, severe damage to the occipital lobe can result in a variety of visual problems including the loss of color recognition, visual hallucinations or illusions, problems recognizing objects, and difficulty understanding language.