Celiac disease was thought to be uncommon in the United States until not long ago when it was discovered that approximately 1% or 1 in 133 people have the disease, also known as gluten intolerance. Symptoms of celiac disease range from weight loss, weakness, fatigue, and chronic diarrhea, to abdominal cramps and mild bloating. The only relief for these symptoms is to remove gluten from your diet, which will allow the small intestine to heal. But what about soy? Does soy contain gluten? 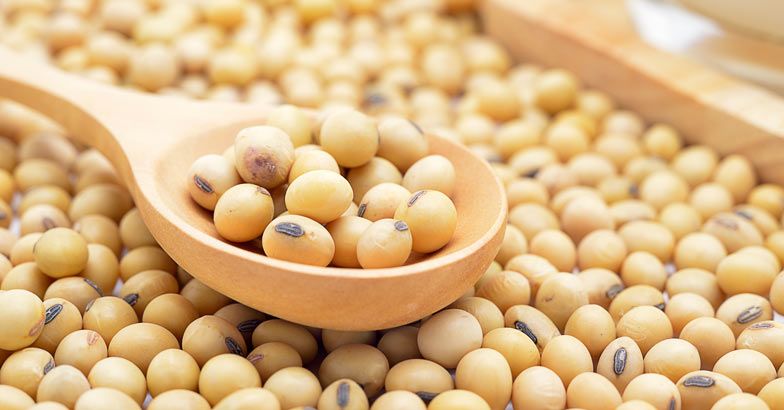 Gluten is found in wheat, barley, rye, triticale, and malt, but not in soy. Therefore, it is safe to eat soybeans. However, when soy protein, flour, or soy in some other form is used as an ingredient in a food, that food may also contain a form of wheat or another gluten-containing grain. Nowadays, about the only form of plain soybeans is in the form of edamame or dried soybeans that you can cook yourself.

One would think that soymilk, soy ice cream, and soy sauce would be safe for a celiac to consume. However, some people find they have issues even with these things. That is because of the way soybeans are grown and harvested. Many farmers rotate growing soybeans and wheat in the same fields. Because the same harvesters are used and the same storage bins are used, a few grains of wheat get mixed in with the soybeans, which in turn go to the processor that grinds them into flour or otherwise processes them. Now there is some wheat mixed in with the soy. Although the amount may seem insignificant, it can affect those with a gluten sensitivity or intolerance.

Because soy is commonly used in many processed foods, the celiac needs to be diligent in reading food labels. Soy protein combined with wheat gluten is the main ingredient in most meat substitutes. Soy is even found in candy bars.

How to Ensure Your Soy Products Don't Have Gluten

More and more foods are being labeled as “gluten free”, so if you are diligent in reading labels, you will be able to find foods that are acceptable to use. But you may wonder, is soy gluten free, especially foods that are largely made from soybeans?

Can Your Reaction Be from Soy Allergy?

Many people react to eating soy much the same as they do when eating wheat or other foods containing gluten, so it could be that these people are allergic to soy itself. Soy is on the list of the top eight allergens in the United States. So your allergy may not be limited to gluten, but also include soy.

Your doctor may utilize one or more of several allergy tests available to determine if you have a soy allergy.

Completely eliminating soy from the diet is the only sure method for avoiding an allergic reaction to it. This requires learning all the names that soy is listed in foods, and paying close attention to food labels. Parents of children must monitor their food closely, alerting school staff and parents of the child’s friends of the allergy, also. You should also inquire about ingredients in foods in restaurants.

No matter how careful you try to be, you may accidentally eat something with soy in it. In case of a severe reaction, you may need an injection of epinephrine followed up with a visit to the emergency room.