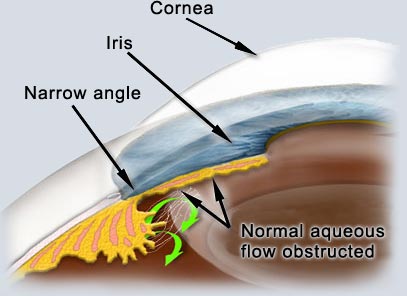 Glaucoma is a term used to describe a group of eye disorders. It is caused by extreme pressure in the eye. Most people suffer few symptoms from glaucoma and the symptoms that do arise are typically not noticeable until the disease has progressed. However, there are instances in which glaucoma symptoms are acute and an indication of a medical emergency.

Glaucoma damages the optic nerve and eventually leads to peripheral vision loss and blindness. More than two million people in the United States are affected by glaucoma and the number is expected to increase by about a third in the next decade.

This is different from other forms of the disease because symptoms can occur suddenly. It happens when the iris (the colored part of the eye) is pulled or pushed out of place. This blocks the drainage angle of the eye. This blockage causes the eye’s internal pressure to spike, which will damage the optic nerve.

Symptoms can last for hours or until the blockage is reduced and they include:

Attacks of these symptoms are recurrent and typically cause a portion of a person’s peripheral vision to be lost. Developing acute symptoms associated with this glaucoma is considered a medical emergency. The pressure must be reduced or a person is at risk for permanent blindness. If you are unable to reach your ophthalmologist, head to the nearest hospital emergency room.

If your symptoms are chronic, it is not considered an emergency and is more like other forms of the disease. Vision can be damaged over time, but there is no sudden onset of severe symptoms and vision is affected over time.

Several factors increase a person’s risk for developing this kind of glaucoma.

There are several factors that contribute to the development of this glaucoma. All of them create abnormal positioning of the iris and affect drainage of fluid in the eye. These include:

Iris plateau occurs when the iris is attached too close to the trabecular meshwork, which is where drainage occurs. As dilation of the pupil occurs, the tissue around the iris bunches in the drainage angle and creates a blockage. This type of attack typically occurs when the pupil dilates in dim lighting or if eye drops are used to enlarge the pupils.

This occurs when the aqueous humor eye fluid produced in the ciliary body behind the iris does not flow easily through the pupil into the anterior chamber of the eye. Problems occur when the back of the iris adheres to the lens inside of the eye and blocks the pupillary channel. The fluid backs up and pushes the iris forward, causing it to close the drainage angle.

Angle closure can be a problem for people who are farsighted because they have shallow anterior chambers and narrow angles.

If a tumor develops behind the iris, it can trigger swelling of the ciliary body and alter the shape of the eye. Odds are also increased after a person undergoes detached retina surgery.

To treat this glaucoma, the pressure causing problems to occur must be reduced. This is the primary goal of all treatment methods. There are several options for treatment. These include:

There are several different types of glaucoma surgery. They include:

Finally, there are several less invasive techniques that can be used to improve drainage and prevent pressure from building. They include superficial incisions, so a patient experiences fewer risks and complications.