Why You Have Fingernail Ridges and How to Deal With It

When you look at your fingernails, you may be able to make out raised lines running either vertically (aligned with your fingers) or horizontally (across your nails). Sometimes, especially when these ridges are very defined and apparent, they can cause your fingernails to look abnormal. Vertical ridges are often considered to be a simple genetic attribute to one’s fingernails and do not always require alarm or treatment. While horizontal lines should be taken more seriously as they are a direct indication of underlying medical conditions.

A diet lacking in essential nutrients can and will disrupt the process of keratin formation in your nails and can cause horizontal lines. This, along with insufficient moisture, creates nail ridges and can make nails very brittle and prone to breakage. Horizontal ridges are also caused by various respiratory diseases, autoimmune diseases, skin disorders and exposure to harsh toxins.

Familiarizing Yourself with the Different Types of Horizontal Fingernail Ridges: 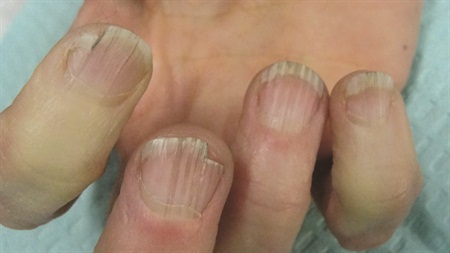 Relief and Prevention of Fingernail Ridges

Your diet is a major player in how healthy your skin and nails are.

2. Take Care of Your Nails

Many health issues, like high blood pressure, and diseases, like diabetes, liver failure or cancer, can also cause fingernail ridges.

Diagnosing the problems or causes of your fingernail ridges and following up with proper treatment is always the best approach to relieving the problem. Remember that in more serious cases you may need to consult with a doctor.