Adrenal gland cancers occur when abnormal cells form in or travel to the adrenal glands from other parts of the body. It is often aggressive, though when found early, adrenal cancer can be cured. However, if the cancer has spread to areas of the body beyond the adrenal gland, a cure becomes less likely. Treatment can be used to delay progression or recurrence of the cancer.

What Is Adrenal Gland? 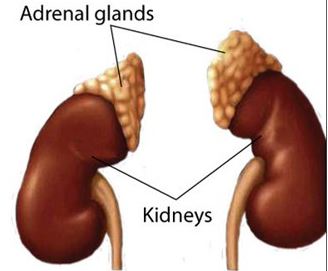 The adrenal glands are a part of the body’s endocrine system and they sit on top of the kidneys. They produce a number of essential hormones that the body needs to function normally. The glands are made up of two parts—the outer part called the cortex and the inner medulla. Adrenal cancers usually occur on the outer cortex.

At present, the cause of adrenal gland cancer is unknown, though there are known risk factors. Those risk factors include:

Symptoms of adrenal gland cancer depend on the type of cancer you have. They include:

This is a rare tumor that is usually benign, but it can cause an overproduction of hormones, which causes persistent or episodic high blood pressure. According to Mayo Clinic, it can result in severe damage to cardiovascular system if left untreated. The symptoms include:

This is a cancer that begins in the adrenal glands, but forms in nerve tissue and often comes on in early childhood. Neuroblastoma can also develop in the chest, other parts of abdomen, in the neck and near the spine. The symptoms include:

This cancer is rare and is commonly seen in children under the age of five and adults in their 30s and 40s and can cause an overproduction of hormones. It originates in adrenal cortex. Symptoms include:

Special notes on signs of adrenal gland cancer in children:

Some other possible symptoms of adrenal gland cancer include:

Diagnosis of adrenal gland cancer starts with your medical history, a physical exam, and any symptoms you may be having. Blood and urine samples will be taken and there may be other test ordered. These tests include:

Adrenal gland cancer can return at any time so follow-up appointments with your doctor are important. You may have to take prescription hormones if you were on drugs like Mitotane for hormone suppression during your treatment.